Releasing an application to the Live environment.

This document discusses the process of deploying an application to the Live environment.

Once the development team are satisified with an application's performance in TEST mode and a sample of end users have approved it in ACCEPTANCE mode, it is time for the application to be deployed to the Live environment where it will be available to all end users.

2 Deploying to the Live environment

The steps below will help you release your application to the Live environment.

All redirection links to RunMyProcess in the Web Interface must use the suffix ?P_mode=${P_mode}. This ensures that the Web Interface is running in the correct mode, TEST > TEST, LIVE > LIVE. More information about P_mode.

N.B: Don't pass the P_version=${P_version} parameter. As versions are related to projects, if you redirect to a Web Interface that does not belong to the same project you will get an error.

Before releasing your project to LIVE, you will need to create a version. Projects may include other projects therefore it is important to consider the hierarchy and start from the bottom.

For example, consider a project with the configuration:

In this project, the order to respect is: Project 'Mail provider', then Project 'Connectors', then P1, followed by P2 and then P3.

To create a new version, go to the Project View, choose the Versions tab and click on New Version.

Enter a name for your version. It is good practice to enter the date and the version number as your title for the first version. 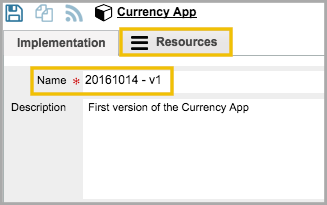 Next go to the Resources tab.

You will see two options - Include All Resources and Always keep all resources updated:

Then you can save your version and return to the versions list:

You can now switch it to LIVE by clicking on the Pencil icon next to the Mode and choosing 'Production'. You will be asked to confirm that you want to release this version to Live.

This should be repeated for all your projects, in the correct order. You'll then be able to open your Web Interfaces in LIVE, using the suffix ?P_mode=LIVE in the URL.

When releasing a version other than the first one, it is important to assess whether the changes made since the last version are Minor or Major. This is because it will determine what should happen to existing instances - should they continue to run in the previous design or should they run in the new design?

The following will help you to decide if the changes made should be considered as Minor or Major.

To create a new version, go to the Project View, choose the Versions tab and click on New Version

Enter a name for your version. It is good practice is to include the date, the version number and possibly list 2 or 3 major features added since the last version. Then go to the Resources tab:

You will see two options - Include All Resources and Always keep all resources updated:

After the project has been saved it can be switched to LIVE by going to the Versions list, identify the newly created version, click on the pencil icon next to the Mode and choose Production.

When you try to deploy a subseqent version to LIVE, this popup message will appear:

The answer to this important question will depend on whether it was determined that the changes made since the previous version were Minor or Major.

Important note : If you made MAJOR changes and tick 'New version', you may jeapordize your pending processes forever as :

When you create versions sequentially (by choosing to allow uncompleted processes to run in the 'New version' of the project), you create a chain.

If you create v1 then v2 then v3 with that option, you'll have:

If you subsequentally create a V4 but specify that uncompleted versions should run in the previous version of the project, the chain is broken.

It means that if you then create a v5 ticking 'New version' you have:

4 Rebooting a red process in production

First read the tutorial: How to reboot red processes

There are several reasons why processes in LIVE may fail, the four main ones are:

The procedure for dealing with these cases are detailed below:

Case (1) A connector retrieved a time out error message

In this case you should reboot the process in its current version.

In these cases there is a problem with the process design. It may be that a case wasn't handled, a break is missing in a while loop or a call has been made to a variable that doesn't exist. The error message reported should provide enough details to investigate the cause of the error and the appropriate steps to take.

Once you have identified the source of the problem you should: