This document discusses how to conduct User Acceptance Testing for RunMyProcess applications.

Once developers are satisfied that their application performs as expected in TEST mode, it is time to involve end users in the testing process in order to ensure that the final solution is acceptable to them. Deploying an application in ACCEPTANCE mode allows a selection of end users to test applications without having any impact on the LIVE environment.

Applications should be deployed to ACCEPTANCE mode following TEST mode and before LIVE mode.

In ACCEPTANCE mode, a user will have the same rights as in LIVE mode but based on the acceptance users list.

A selection of end users should be identified and set up on the platform to have access to the application. These users will be authorized to use the application, create requests and instances as if they were in LIVE mode. They will however be running in the ACCEPTANCE mode which means that the data is seperate and will not pollute the production data (LIVE mode). Acceptance environment requests are automatically deleted after 2 months. 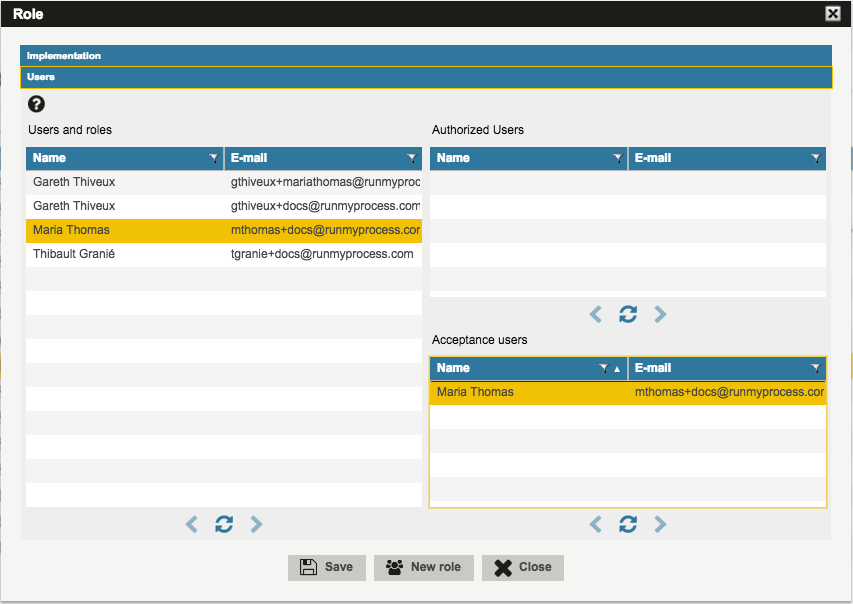 Please note that a list of acceptance users cannot be generated by a script therefore in scripted lanes you have to add the users manually.

2.2. Executing the application in ACCEPTANCE mode

To execute an application in ACCEPTANCE mode you have to create a version and set this version as the ACCEPTANCE version. Click on the Versions tab for your project, this will display each version of your project that exits. To make a version available for acceptance testing, click on the pencil icon next to Mode and Choose Acceptance. After confirming that you wish to proceed the version will be available to be launched in Acceptance mode.

You can now use this version to launch a process, a web interface and all resources that are part of your application in ACCEPTANCE mode.

A LIVE version can also be used to execute an application in ACCEPTANCE mode.

An ACCEPTANCE version is read-only (as are LIVE versions).

It is possible that after correcting some bugs found during Acceptance testing you will want to create a new version and deploy this in ACCEPTANCE mode.

The process for deploying the new version to ACCEPTANCE mode will be the same as for the first version, see section 2.2. A link will be established between the two versions - the new version will be noted as the "next version" on the original one.

You will be asked to decide under which version you would like any uncompleted processes to run under, you can decide to let them continue with the old version or to migrate them to the new version. By default they will remain under the previous version.

If you choose for them to continue with the old version then both versions will run in ACCEPTANCE mode. If, however, you choose for any uncompleted processes to move to the new version then the superseded version will continue in TEST mode and a link will be established between the two versions - the new version will be noted as the "next version" on the original one.

ACCEPTANCE mode is an essential tool for validating an application (a set of process, user interface and services). This mode allows users to test the behaviour and performance of the application as it would be in LIVE mode without impacting on the production data.