For access control at project level, DigitalSuite uses roles that provide users with the access rights required to fulfill their tasks. Learn more about:

DigitalSuite allows customers to define any number of roles and assign them to users as required. Roles are grouped into organizations, and organizations can contain many roles.

The role-based access defined at project level applies to all resources that belong to the project. For subprojects, the access rights may differ from those defined for the main project.

DigitalSuite distinguishes between the following types of access rights:

Details on the actions possible with each type of access right are provided here.

In order to reflect the structure of responsibilities, customers can use organizations and role hierarchies:

The assignment of users to roles can be done in different ways, spanning both static and dynamic allocation. The same role can have different members for the Live and Acceptance execution modes. In Test mode, the members are identical to Live mode.

Dynamic allocation means assigning users to roles at runtime of an application, depending on current data and process variables specified in the process and web interface design.

Roles with dynamic allocation are empty when they are created.

When creating roles, it is good practice to add the type of member allocation as a suffix to the role name, enclosed in parentheses, i.e. (everybody), (script), (dynamic), or (runtime). Static roles do not get a name suffix.

In role hierarchies, parent roles which do not have members of their own, can be denoted by adding the suffix (empty) to their name.

Roles in Projects - Pools and Lanes

Roles are defined independent of projects and then assigned to projects as required. A project can use roles from different organizations, and a role can be used in different projects.

The role assignments are made at the processes and composite APIs of projects. In the design of the process or composite API, each role is represented by its own lane. Lanes representing roles of the same organization are grouped in the same pool. 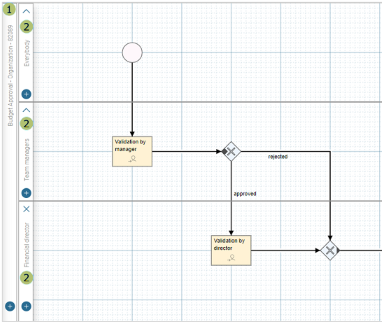 The illustration shows a process with one pool, indicated by

, and three lanes, indicated by

The lanes clearly show which process step is assigned to each role. The roles with their defined access rights apply to all activities and referenced resources in the corresponding lanes.

An exception to this rule are resources of subprojects which are included in the current project. This means that resources that require their own access rights, for example, individual web interfaces, can be defined in their own projects, which can then be included as subprojects into others.